Long before I started up UltraCrispy as it appears in its current incarnation, I considered using the site for a comic strip about a really young superhero and his parents who do not have super powers. Wow, I didn't realize how creepy I made the kid's face. It doesn't even look like a kid's face. For some reason he reminds me of Michael Jackson. Look how far back I placed his ears. Yikes. Anyway, the image above is a close-up of the strip template below:

"#3987" is a made-up strip number. I didn't actually do nearly 4000 strips. I didn't even do one of them. Below is the sketch where the whole idea began. It's funny how I've abandoned several comics involving superheroes. 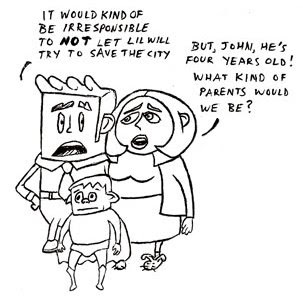