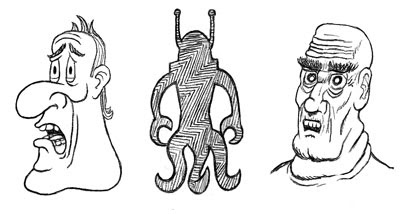 It's funny how my own sketches remind me of people or things after I've made the sketch. For example, the figure in the middle reminds me of the alien depicted on the movie posters for District 9 (boo!). And the guy on the right reminds me of Terri Schiavo. Both unintentional resemblances.

I've been bitching a lot lately about things I don't like. Well, here are some things I've been enjoying lately (for a change):
The graphic novel Local is getting on my good side, but I just started it so I can't vouch for it yet. So far the art is excellent and the stories are compelling.

Finally, the upcoming graphic novel The Squirrel Machine could also be a winner. The artwork looks great and it has the weirdness and creepiness (and perhaps a touch of humor?) that is exactly what I had in mind for my own graphic novel.