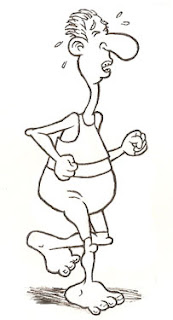 Ugh, this drawing really bothers me. It's not the quality of the drawing, but rather the character depicted. The attire, the barefootedness... yuck. I just noticed I drew him with 3 toes on one foot and 4 toes on the other.

I'm really struggling to get some new comics up. Sure, I'm short on ideas, but mostly I lack the time and/or energy for it. I don't have much left after the beck and call of work and family. Fun fact: I once incorrectly corrected someone for using "beck and call." I said, "I think you mean 'beacon beckon call.'" Ha ha... dumbass.