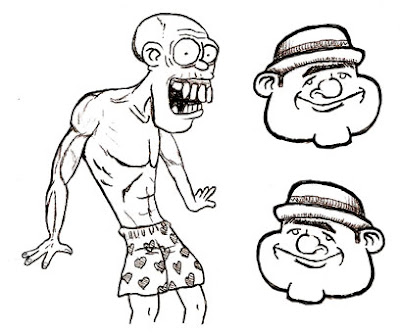 I didn't set out to draw a zombie but I guess that's just what I did. I realize I'm the only one on Earth to feel this way, but I just don't get the entertainment value of zombies. I don't think they're cool, funny, or horrifying. I think they're pretty fucking lame, actually. And that's my opinion, internet!

Oh, and regarding boxers, I went through a good part of my life not realizing people actually wore them. I thought tighty-whities were the only plausible way to go. The only people I saw wearing boxers were cartoon characters and slap-stick buffoons who got pantsed. (By the way, shouldn't that be "de-pantsed"?) Therefore, to me boxers equaled comical and buffoonish. (I now realize that those characters exclusively wore boxers because most people don't want to see such characters in briefs. Ew.)

Eventually, I was (incorrectly?) informed that it's briefs that are comical and buffoonish. Oh, how I was shamed. Well, these days I believe there is no shame in tighty-whities. To me wearing boxers is like going without a bra. I don't need to be swinging around down there. And I don't need to be touching the ground when I'm an old man (if you know what I mean). One more strike against boxers is that they're associated with the idiots whose pants are falling off their asses. And that's another opinion, internet!